Liverpool FC have opened negotiations for the contract renewal of Rafael Camacho, according to reports from the Portuguese press this Friday.

Newspaper O Jogo says the Reds plan to keep the 18-year-old in the squad for a long time, and are already looking to protect him with a new deal, since the current one expires in 2020.

Camacho started his career at Sporting, having then moved to Manchester City in 2014 and signed for Liverpool in 2016.

Although the player is still to make his debut for the Reds, he’s already highly rated by Jurgen Klopp, who’s spoken well of him and brought the youngster to the bench in a few Premier League matches. 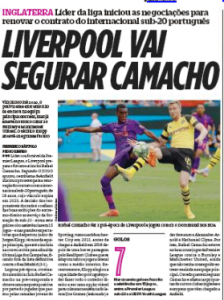 In appearances in Premier League 2 and UEFA Youth League for Liverpool’s youth ranks this season, Camacho has seven goals and eight assists in 15 games.

Although he now plays as a midfielder, Liverpool fans could see him going back to his origins and featuring as a fullback as well.