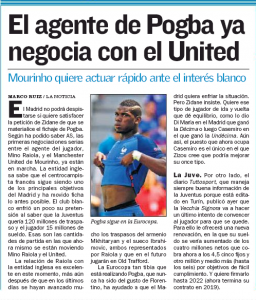 Spanish newspaper AS uses much of its Tuesday edition to stress over the present and future of the national team. It had been widely considered in Spain that what happened at Brazil’s World Cup was just a blip, and the country would be heading back to their throne.

The performance against Italy ended that idea. Italy weren’t just a little bit better than Spain, but much better. It was only David De Gea who kept the scoreline respectable and the Manchester United goalkeeper comes in for praise in the Spanish media today.

After spending a page of two to laugh at England’s result against Iceland, AS move on to transfers. Local club Real Madrid have been strongly linked to Juventus ace Paul Pogba, but AS believe Manchester United are trying to get in there first.

Pogba to Manchester United is a long repeated story, with the idea of a return sometimes appearing ridiculous and at other times seeming natural.

The newspaper say that, according to their own information, Manchester United and Mino Raiola are holding serious negotiations about a Pogba transfer. Jose Mourinho wants to act before Real Madrid do, and is therefore behind the talks.

AS mention a salary request of around €15m a year for Pogba to Manchester United, and a transfer fee of €120m for the Frenchman who came through the club’s youth system.

The Spanish newspaper point out that Raiola’s relationship with Manchester United is excellent. The club already had one Raiola client in Sergio Romero, and are expected to add to that with Henrikh Mkhitaryan and Zlatan Ibrahimovic. Perhaps Pogba is the carrot being dangled to encourage Manchester United to wrap up the other two deals quickly.

Turin newspaper Tuttosport believe Juventus will try and keep Pogba, and they’ve pointed out the player is very happy where he is, and doesn’t need to take the risk of more money for less happiness.

At 23 years of age, Pogba has plenty of time to move in the future, but the pressures of the market seem to increase every summer. A move to Barcelona or Real Madrid may be preferable and the latter could make an attempt, hence Mourinho’s claimed encouragement for quick talks.

Pogba to Manchester United is set to be a theme of the summer. Again.