Barcelona allowed Rafinha join Inter Milan on loan in January. As part of the deal, the Nerazzurri had an option of signing the midfielder on a permanent transfer for €35m, if they qualified for next season’s Champions League.

Inter’s victory over Lazio in the last Serie A fixture of the season helped them meet that criteria. However, they have decided against signing the Brazilian for the price agreed and the player has now returned to Camp Nou.

According to the Catalan newspaper Sport, Tottenham Hotspur have emerged as a new club interested in securing the player’s services this summer.

Mauricio Pochettino, the north London club’s manager wants to take advantage of Inter’s situation by making an approach for Rafinha. The Argentine coach wants to strengthen his side’s midfield and has identified the Barcelona man as a transfer target.

Rafinha doesn’t have a future with the La Liga winners and needs to find a new club. The asking price of €35m will not be an issue for Tottenham and their manager is the “main endorser” of the player. 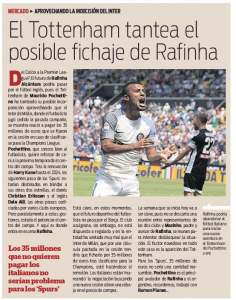 Inter have still not given up on signing Rafinha and hope to reduce the price tag for the transfer to take place, they’ve even tried to secure another loan.

The Italian club and Barcelona, along with Mazinho, the midfielder’s father and agent, will sit together and try to see if the transfer of the South American to San Siro is possible. The interest from Tottenham has now changed the dynamics.

Over the past few days the Catalan media have strongly linked West Ham, Arsenal and now Tottenham to Rafinha. It’s a possibility there’s an at Barca over how Inter are going about things and the English clubs may be being used to pressure the Italian side.