Gerard Deulofeu and Marlon are the two Barcelona players who last season spent time on loan at Watford and Nice respectively.

The Spain international re-signed for the Catalan club last summer, but was allowed to join the Premier League club on loan in January.

The La Liga winners agreed a two-year loan deal with Nice for Marlon last summer. It now looks like his loan deal will be cancelled as he is set to leave Camp Nou on a permanent transfer this summer.

Watford are keen on securing Deulofeu’s signature on a permanent deal, while West Ham United have shown interest in bringing Marlon to the English capital club. Today’s edition of the Catalan newspaper Mundo Deportivo claims both deals are close to being completed.

Deulofeu has a €20m release clause in his contract, but Barcelona and Watford are likely to agree a fee of €13m for the forward. His move to Vicarage Road has been sealed and only the official announcement is pending. 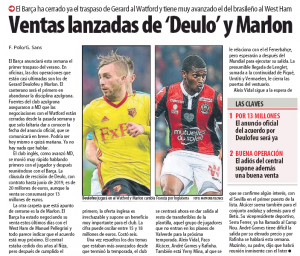 Meanwhile, West Ham and the La Liga winners have been negotiating for Marlon in the past few days. The report claims “everything seems to indicate that the agreement is very close”. The two clubs could agree a fee between €15m and €18m for the defender.

Marlon to West Ham was first pushed by the Catalan media in May, and now they’re going strongly with it again.