Tiago Ilori is really having a hard time since leaving Reading to join his former club Sporting last month.

Although the player had a big desire to make the move, things are not working out for him in Lisbon the way he expected to.

First, Ilori was booed during his first public appearance for the club, and he didn’t even have to enter the pitch for that. It happened last weekend, in the league game against Benfica, when his name was announced on the PA system.

According to the Portuguese press, Ilori was booed because of some hard feelings the fans have over his departure a few years back.

That was a clear sign the player would have to work hard to get the affection from the Sportinguistas again, but his debut on Wednesday night wasn’t the best. 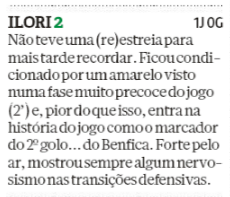 Once again playing against Benfica, this time for the Portuguese Cup, Ilori had a nightmare of a game.

It started with him being booked after only two minutes. Then he scored an own goal, which was Benfica’s second, and ended up being the Eagles’ winner. His overall performance was poor as well, with newspaper Record calling him out for his nervousness during the match.

That’s a shame for the former Reading player, who we expect to slowly improve once he gets out of this intimidating situation.