It’s with great pride that the Portuguese press reports Bas Dost’s wish to remain at Sporting and win a championship there.

The Dutch striker, who has been in Lisbon for just a year and a half, has been showing some big love for the club, and doesn’t seem keen on leaving.

The player had already talked about it a couple of months ago, and today, newspaper A Bola brings a full page story about this.

They claim that Dost didn’t even want to listen to the approaches that were recently made, and that includes from the Premier League, with West Brom and Stoke City both mentioned. 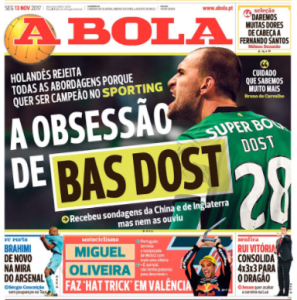 Benfica’s crisis means that Sporting are really having a shot at the title this season, and Dost is their main man to achieve that. The player has already scored ten goals, and maybe could equal the 37 from last year.

That’s why his ‘obsession’, as written on the front page, is so important for the club, especially because offers from China and England are obviously attractive.

Both West Brom and Stoke City could definitely pay him more than what he earns at Sporting, and would also give him the chance of playing in the Premier League, something that most of the players in Portugal have as an objective.

Now although a January move seems impossible, it would be too much to say that West Brom or Stoke wouldn’t have a chance to land him in the summer.

Things will be quite different by then, with the striker either celebrating a title or lamenting the failure for a second consecutive season.

That will definitely it things easier to convince him. But maybe not Sporting, who keep demanding his €60m release clause to let him go.