Goncalo Ramos ‘has his days numbered’ at Benfica, with Nottingham Forest keen on a move for the forward.

That’s according to Record, who say Steve Cooper’s side have offered €30m but the Eagles are waiting for higher bids.

The newspaper reports that the Portuguese side are planning to complete the transfer of the striker after the Champions League playoffs. In other words, in the last week of the transfer market.

England seems to be the ‘most likely destination’ for the player and Benfica have already received a €30m bid from Nottingham Forest.

They’ve been following the 21-year-old for a long time and now they have returned to the Premier League, they have ‘formalised their interest’ in signing the player. 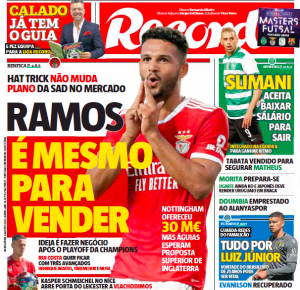 He, though, ‘twists his nose’ at the interest as he is aspiring to a move elsewhere and is aware another offer from an unnamed club in England is on the way.

Benfica ‘expect to receive’ €40m, including variables in any deal, and already rejected a €20m plus bonuses and a percentage of a future transfer from Borussia Dortmund earlier this summer.

They’d happily do business with Nottingham Forest but Ramos has his eyes on a move elsewhere so The Tricky Trees have some convincing to do.