Home Championship Player won’t force way out of Reading despite wish to move to...
SHARE

Sporting and Reading are still struggling to find a deal for the transfer of Tiago Ilori to the Portuguese side.

Lisbon newspapers A Bola and Record both have updates on the situation today, claiming that although the player is waiting to make the move, the clubs can’t get to an agreement regarding the fee.

Reading are reportedly demanding €3m for a deal, while Sporting already offered €1.5m, and will now only raise the bid to €2m, no more than that.

A Bola says the Lions could even include some bonuses, but they would also have to pay the fee in different instalments. 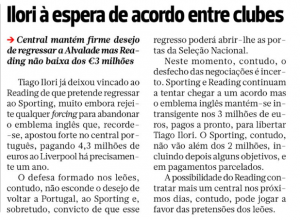 A Bola claims that although the player wants to return to Sporting so it would be easier for him to get a call up for the national team, he won’t force his way out of Reading, who have made a big effort to sign him from Liverpool.

Record says this week will be ‘decisive’ for a deal, although the transfer window goes until January 31st.