Eden Hazard had a standout campaign with Chelsea last term, scoring 21 goals and registering 17 assists in all competitions and he also helped the Blues win the Europa League.

The Belgium international left Stamford Bridge and completed a €100m move to Real Madrid in the summer. However, things haven’t gone well for him since he left Chelsea.

Mundo Deportivo claims the 28-year-old’s weight was questioned when he arrived for preseason and just days before the start of the new season, he suffered an injury.

Hazard spent 25 days away from the pitch and made his debut against Levante earlier this month. He’s played 267 minutes across four matches and is yet to score or manage an assist. 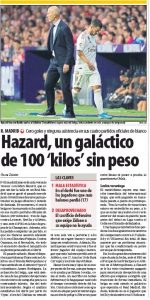 Mundo claims the former Lille man has turned out to be a ‘big disappointment’ for Real Madrid and is ‘certainly not yet the player who shone and dazzled at Chelsea’.

He will be provided an opportunity to score his first goal when Zinedine Zidane’s side face Club Brugge in the Champions League tie on Tuesday.