After a couple of quiet days from the Portuguese press on Victor Lindelof to Manchester United, things are back with a bang. Record claims the deal is a step away from being completed, and they say the 22 year old defender has agreed his own terms with Manchester United.

He’s expected ‘in the coming days’ to arrive for a medical to complete the transfer, and Record point out that, due to international duty, he won’t be able to have the checks before Wednesday.

Benfica will receive €35m plus a further €5m based on Lindelof’s achievements with Jose Mourinho’s team. It seems a relatively fair deal for all concerned. Manchester United will have to pay higher than Lindelof’s previous €30m release clause, but not too much higher, and Benfica have sorted out the Västerås SK (Lindelof’s former club) cut of the deal. 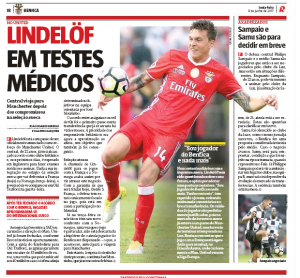 Taking it to €40m, as long as the player is successful, doesn’t seem like too great a stretch considering Lindelof has progressed further, and the deal is now more straightforward.

Record rightly point out this has all been going for months but they genuinely believe real steps are being taken and that Victor Lindelof is close to becoming a Manchester United player.