After reporting that West Ham United had reached an agreement for the Vitória Guimarães striker Xande Silva, the Portuguese press now claims that the player is signing for the club on Wednesday.

According to newspaper O Jogo, the 21-year-old is flying to London to have his medicals and then sign a three-year contract with the Hammers today.

The player had his last training for Vitória Guimarães on Tuesday, but said goodbye to teammates and staff right after the session.

O Jogo claims that he’s moving on an initial €1.5m deal, with some performance bonuses which can make the transfer cost up to €3.5m for West Ham. 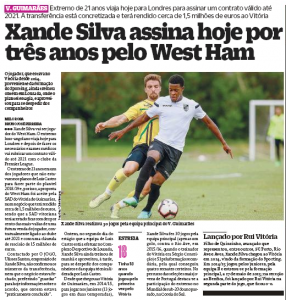 Despite saying the agreement is ‘pratically concluded’, the player’s agent Ulisses Santos has refused to publicly confirm the deal to the newspaper.

But other outlets such as Record and A Bola also back-up the transfer and timeframe. They agree that Silva should first join West Ham’s U-23 squad, and then fight for his place in the first team.