Everton are after a left-footed centre-back, if the latest rumours are to be believed.

We’ve all seen the stories sending Marcos Rojo to Goodison Park, but the Argentina international isn’t the only man on Marco Silva’s list, according to Corriere dello Sport.

The Italian newspaper state on Wednesday the Toffees have put a spoke in Cagliari’s wheel, as the Serie A side were close to sorting out a deal for Gremio’s Walter Kannemann until Everton came along.

The 27-year-old was an alternative to Lorenzo Tonelli for the Serie A side, but now they have to provide competition to a Premier League side, which isn’t ideal. 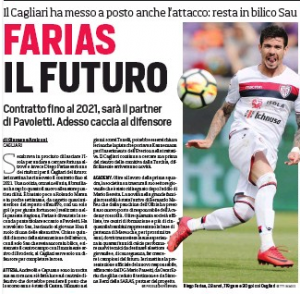 Numbers aren’t mentioned, meaning we have no idea how much Gremio would want for the left-footed defender, who has just over a year on his deal, which ends on December 31st 2019.

We’ll be keeping an eye on this one, because it’s come from left field, and it could just be an agent playing tricks.

Then again, with both Rojo and Kannemann being left-footed, Everton could also be scouring the globe for someone who fits the profile Marco Silva has requested.