For the past few weeks, reports from Spain, Germany and England have stated that Real Madrid and Manchester City are the only two clubs left in the battle for Erling Haaland.

Various claims have talked about the Borussia Dortmund star receiving an offer from the Citizens and their interest in the striker has also been confirmed by BVB advisor Matthias Sammer.

AS on Friday state the 21-year-old’s father, along with agent Mino Raiola, received a ‘big offer’ from the Premier League winners. This proposal includes a weekly salary of €600,000, taking the annual net salary to around €27-28m.

It’s claimed Haaland ‘rejected’ the Etihad club’s offer ‘last week’, but the report explains his ‘no’ to City is ‘not definitive’.

This indicates the Norway international is ‘still waiting’ for the La Liga side, the team he ‘wants to join’ in the summer. However, the former Red Bull Salzburg man’s desire to join Los Blancos has been affected by the overall cost of the operation.

El Chiringuito’s Josep Pedrerol reported the total fee for the transfer, plus commission to his father and Raiola, will be around €200m. AS have relayed Pedrerol’s claims and add that apart from this, there is net salary demand of €25m per year made by the attacker.

The cost involved to carry out the operation has ‘raised serious doubts’ at the Bernabéu. His injury record over the past two years is also not helping the cause. Real Madrid have seen two of their big signings, Eden Hazard and Gareth Bale, struggling with injuries over the years. 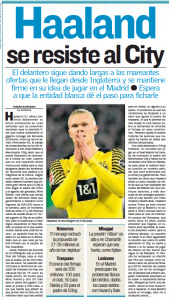 Haaland’s will to move to the Spanish capital club has ‘stopped Manchester City’s assault for the time being’. However, he is a ‘little restless’ given Carlo Anceotti’s side are having doubts.

AS make it clear the Norwegian wants to move to Real Madrid this year and not in 2023, which would have been ideal for the latter.

The newspaper further states: ‘The question is to know if the boy [Haaland] will withstand the pressure that City, his father and Raiola are exerting on him or if his desire to play in white is so strong that he follows the Mbappé route.’

Manchester City offering as much as €28m a year, after tax, just doesn’t seem realistic.