Before Jules Kounde was repeatedly linked with a move to the Premier League, it was his teammate Diego Carlos who was the subject of transfer rumours.

The 28-year-old was linked with multiple English clubs, with Liverpool and Manchester City among those thought to be most seriously in the picture.

A move never happened, or even came close, and then Carlos saw his defensive partner, Kounde, take over the rumour chase. Chelsea made an attempt to sign the Frenchman from Sevilla in the summer, something which was confirmed by the Spanish club’s sporting director, Monchi.

However, Thomas Tuchel’s side didn’t come close to matching Sevilla’s asking price, and there’s since been questions in the Spanish media about how serious Chelsea were in their pursuit.

Kounde has had to accept his fate and that he’ll be at Sevilla this season, and there’s been multiple claims about how that may be impacting him.

With Diego Carlos granting an interview to AS, it’s no surprise he’s been asked about his teammate. The Brazilian was asked about his relationship with Kounde, and whether the player has ‘already forgotten about Chelsea’. 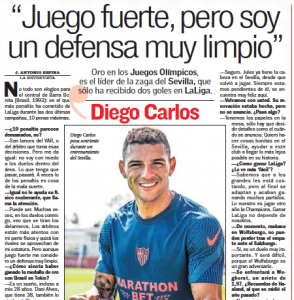 In reply, he said: “Sure. Jules already has his head in Sevilla, since he returned to play. We are always aware of him, he is very happy here.”

Whether that will be the case next summer, remains to be seen.