Home Europe “I would never say no” – Player flirts over signing for Barcelona,...
SHARE

Alex Grimaldo left Barcelona in 2016 to sign for Benfica, feeling he would get more game time, and therefore progress better, at the Lisbon club.

He’s had to contend with injuries and repeated setbacks, yet has managed to put that behind him, and at 26-years-of-age is a regular for his club. He has one goal and two assists to his name so far this season, and will be hoping to improve on the ten assists he managed during the last campaign.

Those kind of figures have naturally resulted in transfer rumours, and a return to Barcelona has been mentioned more than once. With the Spanish left-back now set to face his boyhood club, Catalan newspaper Sport have had a chat with him, and it’s no surprise that a move to the Camp Nou came up in the conversation.

Sport go with a headline saying: “Return? Barca is my home, I would never say no.”

They further quote the Benfica player saying: “It is a scenario that when I left it was never a see you never, it was a see you later. It’s my home, I’ve been there for eight 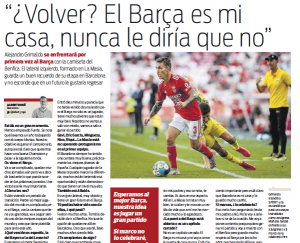 years. I am very good at Benfica, very happy and I feel important, but it is clear that Barcelona is my home and I have a lot of affection for it.”

Grimaldo went on to say that if he scores against Barcelona in the Champions League, he doesn’t plan to celebrate.