Somewhat becoming Wales’ latest hero at the Euros by getting the ball rolling against Turkey on June 16th, Aaron Ramsey was key in getting his nation through to the next stage of the competition.

While he enjoys a near revered status at international level, the same cannot be said when it comes to club football, where his time at Juventus hasn’t gone to plan.

The former Arsenal midfielder has struggled to have the desired impact in Turin since his free transfer from the Emirates in 2019, and talk of a return to the Premier League has been rife of late.

The likes of Crystal Palace and West Ham have been touted as potential landing spots for the 30-year-old, while a surprise move back to the Gunners has also been mentioned.

That’s the one Corriere dello Sport report on on Monday in an article looking at Juventus’ potential comings and goings this summer, as they try to make room for Manuel Locatelli. 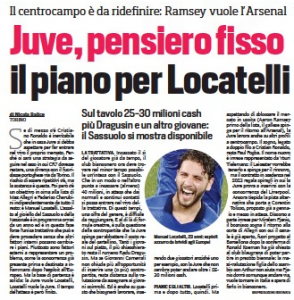 When discussing exits, the newspaper explain the midfielder is ‘first on the list’, with the Welshman is ‘pushing for a return to Arsenal’.

That’s all the detail they are willing to give, but it does give you an idea of how desperate they are to offload Ramsey, whom many Arsenal fans would be more than happy to see return to north London should such a transfer materialise.