Home Premier League Chelsea Chelsea ‘do not feel out of race’ for huge signing – Club...
SHARE

One of the bigger transfer stories taking place around Europe at the moment, the future of Achraf Hakimi continues to be the centre of attention of the Italian media.

Multiple stories on the situation are published every day, with Chelsea fighting Paris Saint-Germain for the Morocco international’s services.

Earlier today, we covered a story from FCInterNews, who explained there were ‘talks on the table’ between all parties, but never really gave us an idea of who was in the lead.

Corriere dello Sport, however, do, stating the Moroccan ‘has a clear preference for Paris Saint-Germain’, whom he already has an agreement with, and while their ‘cash off is higher than Chelsea’s’, it still hasn’t ‘reached the €70m Inter wants’.

Despite all this, the Blues ‘do not feel out of the race’ because they have an ace up their sleeve called Marcos Alonso. 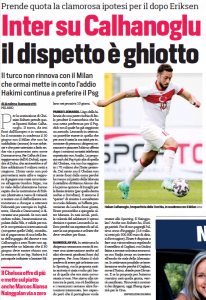 Said to be Simone Inzaghi’s ‘first option’ for the left-back role next season, the Spaniard could turn the tables in Chelsea’s favour, because ‘if the offer from London is right, Inter would try to push [Hakimi] across the Channel’.

That being said, ‘the player’s will is often decisive’, which those in charge of transfers in Paris know full well.

Still, neither club have offered the right amount just yet, so until one of them makes an acceptable bid in the Serie A side’s eyes, nothing will change.