On December 27th, we carried a report from Sport, who claimed that Manchester City have met Frenkie de Jong of Ajax twice and explained the sporting project at the Etihad.

The Premier League winners even made a ‘tempting’ offer for the 21-year-old, who is on the radar of top European clubs.

Erik ten Hag’s side had already made it clear the star will not be allowed to leave in the winter market as they want to keep him at the club until the end of the season.

The Eredivisie outfit will face Real Madrid in the last 16 of the Champions League.

Wednesday’s edition of Catalan newspaper Mundo Deportivo mentions the Netherlands international wants to make a decision on his future before the next European fixture.

It’s once against stated the Dutchman is a priority target for Pep Guardiola’s side and Paris Saint-Germain, and the coming weeks will be ‘decisive’ as the player is expected to decide where he’ll play next season. 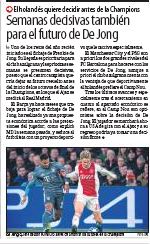 De Jong will travel to the US with Ajax to face Flamengo and Sao Paulo in the Florida Cup later this month and there is a belief that he could make a firm decision once he returns from the tour.