Manchester City are one of the clubs interested in signing Frenkie de Jong of Ajax.

On December 11th, we covered a report from Catalunya Radio, who claimed that Pep Guardiola has held talks with the midfielder ‘several times’ in order to convince him to join the Premier League winners.

Today’s edition of Catalan newspaper Sport once again relays the same information and reports that there was a ‘direct approach’ from the former Bayern Munich manager in order to explain his side’s project.

Manchester City even met with the 21-year-old on two occasions in order to convince him to make a switch to the Etihad, according to the claims,

It’s explained the offer from City was ‘very tempting’, but the Netherlands international is not planning to entertain the proposal because he has no intention of playing in the Premier League.

Sport claims the Eredivisie star’s style of play will suit La Liga better than England, which is why De Jong is not keen on joining City. 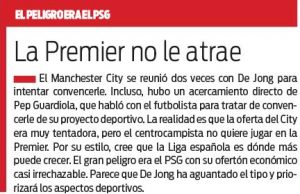 This is likely to come as a disappointment for Guardiola and City, Sport believe… or hope.