Keylor Navas is no longer the first choice goalkeeper at Real Madrid since Thibaut Courtois arrived at the club.

The Costa Rican international was used in the Champions League and the UEFA Super Cup by Julen Lopetegui, but since the Spaniard was sacked and replaced by Santiago Solari, the 32-year-old has not featured once in all competitions.

Sport has an update on the goalkeeper’s situation in today’s edition of the Catalan newspaper and it’s claimed he could take advantage of the Christmas break to think about his future… as Arsenal are interested in him.

Los Blancos custodian has one month to make a decision on whether to make a switch away from the La Liga giants in January.

The Gunners and Juventus are looking at the option of signing Navas and the stopper is aware he will no longer be the first choice player under Solari, explain Sport.

Unai Emery’s side are ‘willing to pay’ €16m to the Spanish capital club for their player. 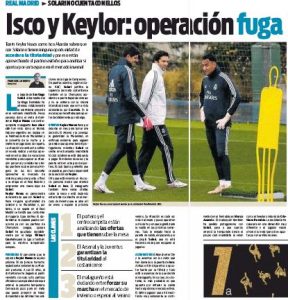 Sport mentions Real would prefer to retain him, but the final decision lies in the hands of Navas.

There seems little reason why Arsenal continue to be heavily linked with Navas, but the Spanish media aren’t letting it go.