The suggestion was the defensive midfielder was open to the move, but it was necessary to convince Leicester City to sanction the transfer and the La Liga outfit are now waiting for the response from the English side.

Speaking to RNE, the 30-year-old admitted that a move to Estadio de la Cerámica is a possibility, as relayed in today’s edition of Mundo Deportivo.

He also admits that there is still no outcome.

Under Claude Puel’s guidance, the former Sevilla man has seen his time on the pitch limited and he’s started only three Premier League games this term. 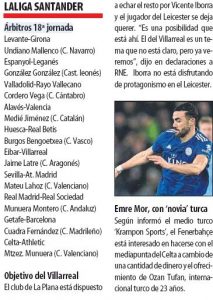 The Catalan newspaper claims that Iborra is ‘not enjoying’ his life at the King Power Stadium since his playing time is restricted.

It’s further claimed that Villarreal are willing to take him and the player is now ‘left waiting’ to find out what will happen in regards to his future.