Whilst it must be noted that every year these are heavily questioned in France, and it sometimes causes some controversy due to claims over a lack of accuracy, the most interesting bits tend to be found in the text rather than just the lists of figures.

Take Cesc Fabregas as an example. When the midfielder left Chelsea it was widely reported, especially in France, that AS Monaco were paying €10m for the transfer.

That didn’t seem a bad return for Maurizio Sarri’s side, and it was presented as Chelsea having played tough. Well, L’Equipe have changed their mind.

It’s claimed that after ‘tough negotiation’, Chelsea agreed to let Fabregas leave the club for no upfront transfer fee. Instead the Blues will be paid on a bonus system, which isn’t detailed. 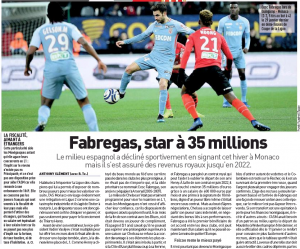 able to get in Europe.

The French newspaper total all this up to be a financial bonanza of around €35m.