The front page of Mundo Deportivo reads ‘Valverde “wants to continue”’ as Barcelona manager beyond this season.

His contract at Camp Nou runs down in 2020 and the ‘Top Secret’ report from the Catalan newspaper claims the backroom staff are more in favour for the 54-year-old to extend his stay at club beyond this season.

Valverde guided the club to win the domestic double in his first season after which he has been ‘gaining weight’ in terms of power, while his staff appreciate him for his modesty, ability to avoid conflicts and his tendency to speak openly with them.

Another factor is Lionel Messi, who respects and listens to his manager and also agrees with Valverde’s decision to substitute him, something that has occurred on several occasions.

The former Athletic Club Bilbao coach shares a ‘good relationship’ with his staff and the heavyweights in the dressing room, including Messi. These are the key factors that favour him to be at the helm beyond this term. 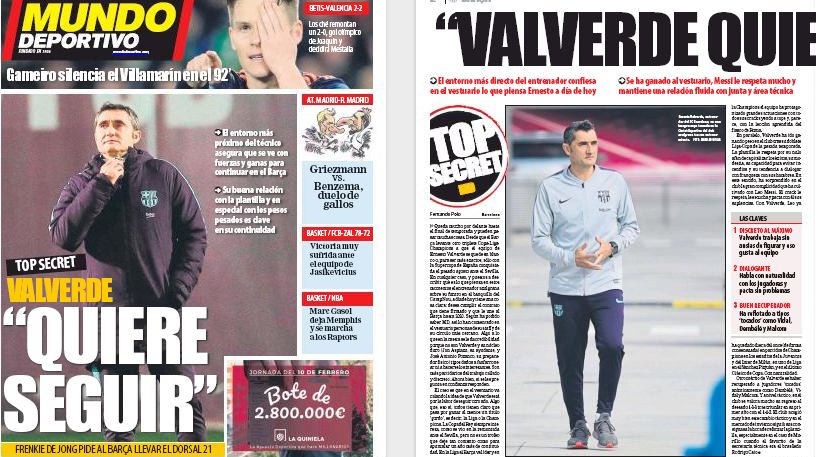 What also adds in his favour is helping the likes of Ousmane Dembélé, Arturo Vidal and Malcom regain confidence.

Last campaign, Valverde preferred a 4-4-2 formation and has adapted to 4-3-3 formation this season, something that has been welcomed really well by the club.

Barca are leading the league table and are in a firm position to retain the title, while they have to overcome Real Madrid to reach the Copa del Rey final.