At the age of 25, Tottenham Hotspur star Harry Kane is one of the best strikers in the world.

Over the past few years, the England international has been in fine form for both the north London club and the Three Lions.

Genk forward Mbwana Ally Samatta was out of action with a knee injury between November 2017 and January 2018.

While on the sidelines, the Tanzania international watched videos of footballers from present and past, including that of Kane.

During an interview with Sport/Foot Magazine, Mbwana explains he’s learnt a lot from Kane.

“Last season, I was injured for a long time on the knee, I took the opportunity to get some football, I watched videos of other attackers: Mbaye Leye, Harry Kane, Thierry Henry, Luis Suarez and many others that I cannot remember …” he explained.

“Kane is an extraordinary finisher, when I see him, I tell myself that I’m going to imitate him, but I know it’s too much.

“He always manages to find the space, even in extreme situations, with a lot of defenders around him, and he has a fantastic left foot, you learn a lot by watching him.”

Looks like watching those videos has helped the attacker, who has already scored 26 goals for Genk in all competitions this term.

Meanwhile, reports claim that Cardiff City were interested in Mbwana during the winter market and he was asked by Belgian newspaper Het Belang van Limburg if he would be interested in making a switch to the Premier League.

“That is something for June or July, what do I have to answer to that already?” the 26-year-old said. 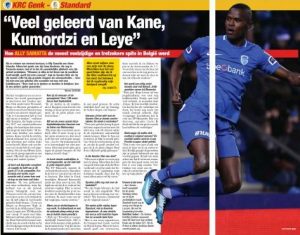 “I have a team behind me that I trust, managers who know very well what is best for my career. Departures never occurred, I certainly feel at home here.”