Sheffield United made serious attempts in the summer window to sign Sander Berge from Genk.

It was covered repeatedly in the Belgian media, with the slant always being a negative one for the Blades. Berge wasn’t keen on joining the newly promoted club and thought he could wait for something better down the line.

Sheffield United were expected to be a relegation battle this season, fighting to make their Premier League stay last more than a single season. Things have gone much better and Chris Wilder’s side find themselves in eighth position and ten points clear of the dreaded relegation zone.

They’re now a much more attractive prospect, and HLN report the Yorkshire club have tried for Berge again. An offer worth €20m has been made for a move this month, but it’s been rejected by Genk.

That doesn’t mean the deal is dead, and it’s explained the Belgian club would like a deal 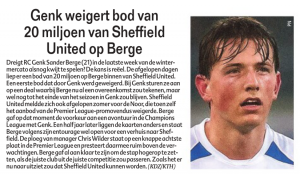 which sees a transfer agreed now and Berge stay where he is for the rest of the season.

HLN report, according to the player’s entourage, that Berge is now open to signing for Sheffield United.

Player prioritising move to Everton – Prefers signing for Toffees over...