Around a week ago the Catalan media claimed a deal between Barcelona and Juventus was almost agreed. Part of it would have seen Nelson Semedo go to Turin, and as far as Barca’s friendly press had it, that would see Manchester City lose out.

The deal always looked to be far too weighted towards the benefit of Barcelona, and it was no surprise to see it fall to pieces within a day.

Saturday’s edition of Mundo Deportivo now suggests Semedo is on his way to Pep Guardiola’s side. It’s reported that the Portugal international is ‘much closer’ to moving to Manchester City.

The player has signing for Guardiola’s club as his current ‘priority’.

Of course, it’s reported Joao Cancelo could be moving the other way, with City’s manager said to be unconvinced with what he’s seen since the player joined from Juventus. 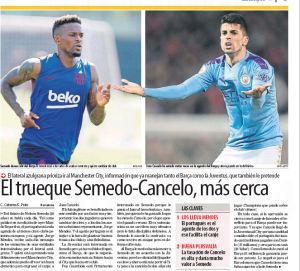 This is such a complicated transfer situation, and there’s likely to be a few more bumps in the road yet, however, it’s interesting that the Catalan slant now favours Semedo moving to Manchester City.