Alfred N’Diaye is in a rather unfortunate situation.

After 20 league matches in Wolves’ Championship winning season, the club haven’t decided to use their clause to make the loan from Villarreal permanent, and that appears to have surprised the Spanish club.

N’Diaye may not have been one of Wolves’ crucial players but the assumption in Spain had been that he was good enough and a permanent deal between the two clubs would be likely.

Now AS report that isn’t happening, and Villarreal need to decide what to do with the player.

Given he was a personal bet of previous manager Marcelino, now at Valencia, there’s not a great deal of background at the Spanish club as to what role he could do in the team next season. 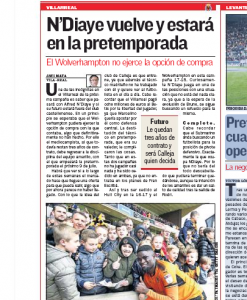 Therefore, if no transfer attempts are made between now the start of pre-season, the 28 year old will be monitored as Villarreal try to work out what to do with their asset.

It’s early in the window, and there’s every chance someone will move in for N’Diaye soon.