Towards the very end of May, L’Equipe had a story explaining that Crystal Palace had made ‘multiple contacts’ with Alban Lafont regarding a potential move to the Premier League.

The young goalkeeper was one of a few Toulouse players expected to leave in the summer onto bigger and better things, alongside Issa Diop, and now he’s made it clear that’s what he’s looking for this summer.

In L’Equipe, the Eagles’ target said: “I think the time has come for me to see something else. I’ve had three seasons at TFC, three seasons where we fought to stay up. This season was mentally very tough. I love my club and my supporters, the board, the managers and especially the president.

“However, I have a feeling of stagnation. I need to see something else to simply go up a level. While respecting my club, I want to play more, play high level games every week and win them. If I leave, it’s not to be on the bench. I want to be number one.” 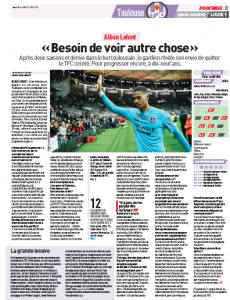 That last part, considering he’s still only 19, is key, and that’s what L’Equipe said Crystal Palace were pushing in their talks with him and his entourage: they wanted him to be their starter.

Despite the interest from Roy Hodgson, Toulouse had yet to comment on the matter, but that seems a bit pointless now, as we can’t see them standing in the youngster’s way.

PSV Eindhoven were also said to be keen, and they can offer European football, which Crystal Palace can’t.

So, money or join the Eredivisie champions?