Despite having failed with their Steve Mandanda experiment, Crystal Palace haven’t given up on Ligue 1 goalkeepers, targeting a far younger prospect in Alban Lafont.

The Toulouse goalkeeper, still only just 19, has acquired a huge amount of experience over the past two seasons, and while he still has his ‘youthful’ moments, he remains one of the more exciting goalkeeping talents in Europe.

According to L’Equipe on Tuesday, the Eagles are in the lead to acquire his services this summer, having already made ‘multiple contacts’ with Lafont’s entourage and have presented him with a clear plan for the future.

That would include making him their number one straight away, replacing Wayne Hennessey, but they aren’t the only ones after. 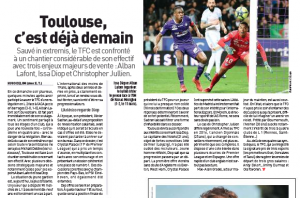 PSV Eindhoven are also said to have undergone concrete discussions regarding Lafont.

However, it’s worth pointing out that Toulouse have yet to have their say on the matter, as there’s little chance they’ll be thrilled at seeing their starlet leave in the summer.

A lot will depend on how much Crystal Palace are prepared to offer, and since Roy Hodgson has yet to make his move, it’s probably worth waiting before that happens before getting excited.