It was said the Premier League side would be  ‘prepared’ to meet the request of €25m for the 21-year-old, making it sound like for the transfer to happen, it would be a matter of finding a deal with the player.

But in a slight update today, the newspaper doesn’t sound so optimistic about it. They do report Wolves’ interest once again, but claim that not even their Europa League spot has been making the player excited about the move.

It’s interesting that none of the reports were strong enough to have their own articles. Just like yesterday, today’s claims are included in the middle of a big story. 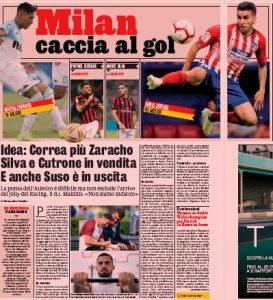 Cutrone has been at Milan since he was a teenager, and finally had some real playing time last season, getting 9 goals in 43 appearances for the club.

Gazzetta Dello Sport lists him as a potential departure for the summer window, but it seems Wolves will to have to work hard to convince him to leave the Rossoneri.