There’s almost no doubt left in anyone’s mind after the huge number of articles reporting it: Arsenal have made an offer of some sort to Fiorentina for Dusan Vlahovic.

That was repeated by journalist Niccolò Ceccarini, who made it clear the offer from the Gunners was ‘there’ and was ‘concrete’, standing at around €70m.

However, it was also made clear that Vlahovic’s agents had ‘never considered’ the proposal, and the player wasn’t actively pushing to leave his club this month.

That’s been the message for quite some time now, but it was sometimes hinted that a door might still be open in case of something mind-boggling. 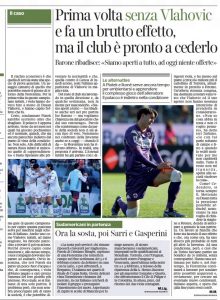 This, however, no longer appears to be the case, at least not with Arsenal, because Corriere Fiorentino make it clear that while the Gunners ‘have already talked to the Viola managers, and have put on the table (approximately) €60m + Lucas Torreira’s transfer’, it is ‘destined to remain in vain’.

Fiorentina had deemed the offer ‘appropriate’, but nothing will happen because ‘Vlahovic and his agent have no intention of taking it into consideration’.

That sounds pretty definitive to us.