Middlesbrough signed Martin Braithwaite from Toulouse in 2017 and Garry Monk was then in charge at Riverside Stadium.

Before the end of that year, Monk was replaced by Tony Pulis and the latter’s playing style did not suit the striker. The former West Brom boss was critical about the 28-year-old and even questioned the Denmark international’s attitude.

Earlier this year, Boro allowed the player to join Leganes on loan and the La Liga side signed him on permanent transfer in the summer.

Following his exit from the Championship side, a section of Middlesbrough fans were highly critical of his time at the club and posted negative comments on social media platforms.

Danish newspaper Jyllands-Posten has interviewed the frontman and asked about his thoughts on the comments made against him.

He said, “People have thanked me for my time at the club. The negative statements came when I was not at the club.”

“Some things have been said that don’t fit. That my attitude was wrong. But it doesn’t fit. All the players are aware how I behaved at Middlesbrough.

“The fact that a picture of me has been created through a manager who has spoken out about me and started lying about some things is not important. You just try to hit me on a personal level.

“I know enough about myself to know how I am and how I have behaved. There’s something Tony Pulis has said that doesn’t fit. But in the end, it’s the past. He must have been pressured when he said that. I have nothing personal with him.

“If you know yourself and you are in balance, then you know how you are as a person. If you behave badly, you know it well. But I’ve been a professional at Middlesbrough and always worked insanely hard. You can be a god one day and a devil the next day. It’s part of the game.”

Braithwaite enjoyed his start at Middlesbrough, but things weren’t the same after Pulis was appointed as the manager. 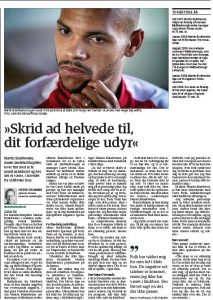 “I fell for it immediately. Then I got a coach who would not play the kind of football that I matched. But there were no hard feelings on my part,” the player explained.

“If you can only work if people embrace you, then you will have a problem the day they do not. I have to be able to do the same on the pitch no matter how people treat me.”

Braithwaite reiterated he has nothing against Pulis, Boro or their supporters.