The Belgium squad are having a few injury issues during the current international break.

Manager Roberto Martinez has had to deal with withdrawals and also injuries being picked up within the group. That looked set to give some of the less regular starters an opportunity for the country’s two matches, but then some of those also have issues.

One of which is Leander Dendoncker.

The 24 year old has been a regular for Wolves so far this season, having established himself during the second half of last season. He’s often to had to put up with oddly negative coverage in his own country, and that was the case shortly after his move to Wolves.

A period of adjustment and proving himself to Nuno Espirito Santo was taken by some in Belgium as proof the player wasn’t quite at the level he believed himself to be. 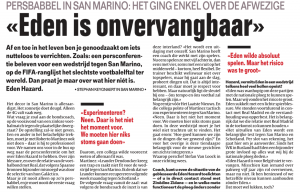 Given all of that, it’s especially disappointing he’s picked up an injury whilst with the national camp, and therefore won’t be able to take his chance, but there could be another opportunity soon.

HLN quote Martinez as saying: “Leander Dendoncker got a kick and won’t be fit for the game against San Marino. I think we can recover Leander against Scotland next Monday.”