Pushed to one side by Mikel Arteta, Lucas Torreira could be living his final days at Arsenal.

The Uruguayan, who played a key role under Unai Emery, has found game time more difficult to come by following the managerial change, which has led to talk about a return to Italy these past couple of weeks.

Torino have been mooted, since that’s where his former Sampdoria manager, Marco Giampaolo, is set to land, but now it’s Fiorentina who are in the lead, according to Gazzetta dello Sport.

They make it immediately clear Torreira ‘isn’t sure’ about staying at Arsenal this summer and ‘has communicated as much to his entourage’.

That’s where Fiorentina come in, who now ‘believe in a mission that only a few hours ago seemed impossible’, which is to bring the midfielder back to Italy.

Their owner, Rocco Commisso, is ‘thinking about another big coup’ after securing the arrival of Franck Ribéry last summer, and has ‘picked out’ Torreira as the one.

Furthermore, the manager, Beppe Iachini, considers the Uruguayan as the ‘perfect man’ to put next to Nordin Amrabat next season at the heart of his squad.

That being said, none of this comes without its own obstacles, as Arsenal haven’t put him on their transfer list, and aren’t prepared to make ‘discounts’. 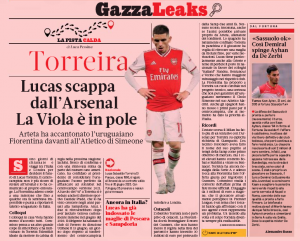 Gazzetta speculate the ‘assist’ could come from Arteta’s lack of faith in the player, who has put him on the bench more often than not, and with Torreira wanting to ‘find a starter’s shirt’ to, among other things, keep his spot in the Uruguay national team, a move looks like the best option.

Fiorentina have ‘offered him a central role in their project’, which even Diego Simeone, who wouldn’t mind him at Atlético Madrid, cannot do.

For now, the Italian side’s owner is ‘studying the outlines of the affair before making an official move’.

They’ve already approached the subject of his €3m/year wages with his agent, and ‘they won’t be a problem’.

It sounds to us that it’s now all about convincing Arsenal.