At the start of this week, both Mundo Deportivo and Diario de Navarra explained Watford’s Cucho Hernández is a target for CA Osasuna.

The Colombian cannot represent the Hornets because he is still ineligible to obtain the work permit required to play for the English club.

It was suggested the 21-year-old’s failure to get clearance to play for Watford could favour the Spanish side in signing him this summer.

Friday’s edition of Mundo Deportivo explains Granada have joined the race for the striker, who spent the last season on loan at RCD Mallorca.

‘Press for Cucho’ is stated in the report’s title, and within the short report, it’s stressed the La Liga side have ‘intensified negotiations’ with Watford to sign the South American.

Granada will start preseason training on August 12th, and they will also have a camp in Marbella. Manager Diego Martínez remains hopeful the club could bring in reinforcements before they make the short trip. 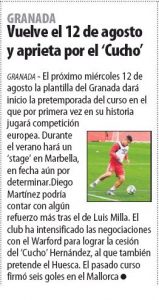 Mundo don’t mention any information about Osasuna, and they also don’t specify if Granada and Huesca want to take the player on loan or sign him on a permanent transfer.