The former Arsenal and Manchester City player has been training with the Hammers, and it’s clear the club have required him to prove his fitness and physical level is at the standard required by the Premier League.

When Nasri first rocked up at West Ham there were assumptions an announcement of his signing would be imminent, but there’s certainly been no rush from the English club, and that could be because there’s no real competition yet.

Even in Turkey, there’s no real claims of Nasri potentially moving to a club there. Throughout Europe, the footballer is largely being ignored, despite still technically being a free agent. 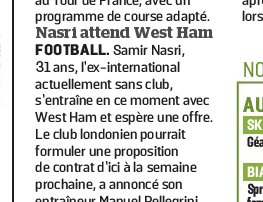 That would suggest there’s no effort from his camp to try and engineer competition for West Ham.

Should it go wrong, and Pellegrini decide against the signing despite all that has now happened, then Nasri could find it difficult to find a new club.

The Frenchman, for now, remains ‘waiting’.