Benfica today travel to St George’s Park for part of their preseason, and not for the first time. The English facilities are very popular with several clubs, and Barcelona have held two recent preseason camps there.

The Portuguese club had wanted Andre Carrillo’s situation sorting out before the trip took place, hoping that the Peruvian’s good performances at the World Cup will have counted for something.

Sunday’s edition of O Jogo reports that Everton and Fulham are in negotiations for the player, along with Al-Hilal. Everton have been linked ever since it looked as though Marco Silva would be the club’s manager, but Fulham are a more recent edition.

Claims from Peru of Fulham interest were picked up in Portugal last week and now it’s run by O Jogo as their own information. 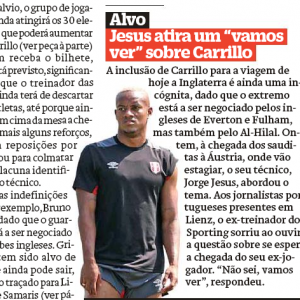 A move to Al-Hilal was thought to be all agreed around a week ago, but things have stuttered when it’s come down to the financial conditions.

O Jogo report Carrillo could fly to England today with Benfica, but it depends on any transfer developments.

That said, St George’s Park is closer to Everton and Fulham than Lisbon is, and that’s something the Portuguese press has been pointing out about potential transfers. Being in England could be rather handy.