For way over a year the Catalan media have been insisting there’s lots of interest in the midfielder, mainly from the Premier League, but right now he still doesn’t seem on the verge of leaving.

The claim of Arsenal interest was started in the English media and then grasped by those in Catalonia. There’s been stories on a possible move to the Gunners repeatedly since, and the Catalan media have been presenting it as their own information.

On Saturday it spread to Madrid based AS, who claimed Unai Emery has been trying to find out more about the player and his situation, even getting information about what Gomes is like away from the football pitch.

Sunday’s edition of Mundo Deportivo claims Emery has ‘asked’ Arsenal to make the signing. Tottenham are referenced too, although it’s stated that interest is from a year ago. Just like Spurs, Juventus are linked again out of habit. 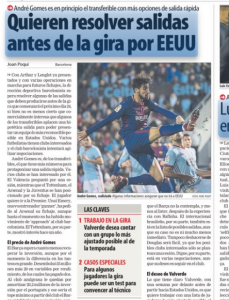 But despite all the Arsenal claims, there’s been no offer made yet, and that’s what Barcelona are waiting for.

The club would prefer the outgoing transfer to be sorted out before their preseason tour starts on July 24th.

That doesn’t give a great deal of time and there’s every chance Barca may take the initiative and contact Arsenal themselves.