If the Italian media are to be believed, Maurizio Sarri has been planning his Chelsea signings for a while, whilst waiting for the whole managerial mess to sort itself out.

Jorginho arriving with Sarri from Napoli has only served to underline that, and the manager could be getting a spine of former players at Stamford Bridge as Chelsea begin an ‘assault’ on targets, reports Tuttosport.

The most linked has of course been Gonzalo Higuain, with Juventus looking to sell after signing Cristiano Ronaldo. But ‘Pipita’ is said to not want to feel pushed into anything, it sound like he needs a little ego soothing at the moment.

There have been repeated reports in the Italian media of some sort of agreement between Chelsea and Juve for the central defender, and Tuttosport touches on that again today. ‘All the parties’ agree, it’s claimed, with an offer of £40m presented as the reason, but first Chelsea would prefer to make a sale. 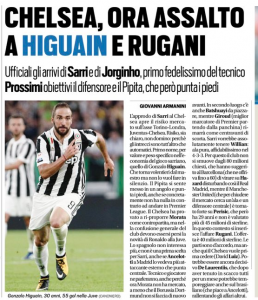 David Luiz is suggested as the man to go out, and transfers are expected to speed up.

Sarri would surely be happy with a spine of players who he’s already managed (Rugani, Jorginho, Higuain) and that would give him more power over the Chelsea squad.