On July 20th, we carried a report from Foot Mercato, who explained that Leeds United will exercise the ‘automatic purchase option’ to sign Illan Meslier.

It was also stated the keeper’s representative will travel to England in the coming days to finalise everything.

The 20-year-old arrived at Elland Road on loan from FC Lorient and the Whites were to make his stay permanent, on condition of promotion to the Premier League.

Marcelo Bielsa’s side have become the first club to seal a berth in the next season’s top flight club competition in England.

Foot Mercato’s report has now been backed up by local newspaper Ouest-France, and their headline reads ‘Illan Meslier to definitely sign with Leeds’.

It’s claimed the automatic purchase option will see the Championship winners pay a fee between €5m and €6m to Lorient for the France U20 international. 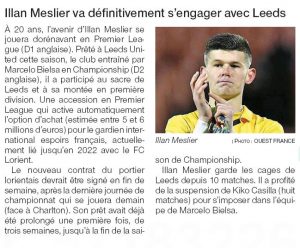 Leeds host Charlton Athletic for the final game of the season on Wednesday, and according to Ouest-France, the stopper will sign a contract with the English club after this, at the ‘end of the week’.

Meslier has made 10 appearances for Leeds this season and most of them came when Kiko Casilla was serving his suspension.