Manchester City defender Elaquim Mangala is reportedly ready to sign for Porto. According to the Portuguese newspaper O Jogo, the deal should be closed on Tuesday.

Their story says that AC Milan, Valencia and Tottenham were also in the battle for the player, but his wish is to return to his old club.

Tottenham interest had seemed quite strange on several levels, but has been mentioned in a few good reports covering the situation. Perhaps Mauricio Pochettino was ready if Mangala became available for an absolutely bargain fee.

A Porto return always looked more beneficial for the player, given how well he did there. 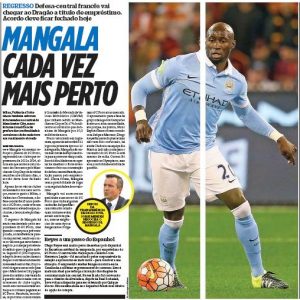 The deal was considered to be impossible when the talks started, but Mangala’s desire to sign for Porto has convinced City to pay for part of his salary during the loan.

The newspaper says that City accepted to loan Mangala because he won’t get game time under Pep Guardiola, so it would be difficult for the club to sell and recover part of the money spent on him.

Mangala signed for Manchester City from Porto in 2014. The article doesn’t mention if the Portuguese side are paying any fees for the loan.