Tottenham Hotspur wanted to bring in a new striker in the winter market following an injury to Harry Kane.

The England international could miss the remainder of the season and Spurs were keen on signing Krzysztof Piątek. However, the Poland international snubbed the north London club and left AC Milan for Hertha Berlin last week.

Polish newspaper Przeglad Sportowy have spoken to former players to ask their opinion on whether Piątek did the right thing by joining the German club over the Premier League side.

Former Poland international Artur Wichniarek backed Piątek’s decision to snub Spurs and suggested his compatriot would have struggled for minutes at Tottenham, once Kane returned from injury.

“Of course, you can’t avoid asking if he wouldn’t do better by going to England. At Tottenham, with whom his agents negotiated, in the long run it would be difficult for him to get a place in the starting XI,” Wichniarek explained.

“He would probably play at the moment because Harry Kane is injured, but the Englishman would probably immediately find himself in the starting eleven [after recovery], and it’s highly doubtful the two could play together. 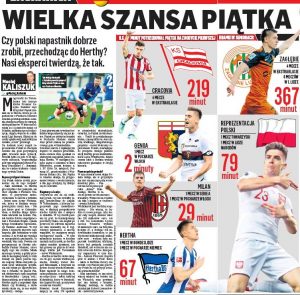 “At this moment of the career in which he found himself, after a very weak autumn round, he was not ready to go to a big club like Tottenham.”

Tottenham finished the January window without signing a recognised striker and Mourinho has used Lucas Moura and Son Heung-min up front in Kane’s absence.