Raheem Sterling has ‘asked’ Manchester City to ‘facilitate’ his loan move to Barcelona in the winter market, according to Mundo Deportivo.

The La Liga side looked at the winger in the last window and despite their failure to land him, he continues to be on their agenda for January.

Sterling is no longer a regular starter at City and made his fourth league start in the Citizens’ 3-0 win over Everton on Sunday, where he also got his name on the scoresheet.

The 26-year-old is ‘frustrated’ with the lack of opportunities at City and therefore, has informed Pep Guardiola he would ‘like to sign’ for the Catalan club in the next window. 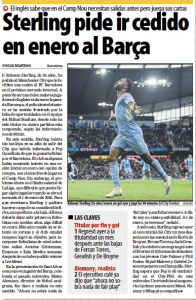 in January, with a purchase option.

The ‘problem’, however, is the salary limit imposed by La Liga, which makes it ‘difficult’ for any new player to arrive at the Camp Nou in the mid-season window.

Even if Sterling agrees to take a pay cut to join Barcelona on loan, the Spanish side will still have to lower their salary budget by cutting ties with some of their own players.

Sport say this seems ‘something difficult’ to do in January.

Sterling is aware of the conditions that need to be fulfilled for him to arrive at Barcelona, but he still ‘plays his cards’.

There’s no reason why Manchester City should make things easy for Barcelona. Sterling is still a very useful player and was able to show that against Everton at the weekend, causing Rafael Benitez’s side all kinds of problems.