Earlier this week, the name Kamal Sowah reemerged with Saint-Etienne reportedly being interested in the versatile Leicester City loanee.

Arriving from the Right to Dream academy in Ghana back in January 2018, the now 21-year-old was immediately sent on loan to OH Leuven, where he remains three years later.

He’s still contracted to Leicester, and yet he still has never trained with them, instead spending time under Nigel Pearson in Belgium.

The transfer, which took place a few weeks after his 18th birthday, came as something as a surprise, and Sport/Foot Magazine decided to find out a bit more about how the Premier League club came to discover him in a lengthy interview in this week’s magazine.

He replied: “My agent had sent them some videos, but I think I impressed them in a game with Right to Dream against them in the Milk Cup in Manchester. Before then, other clubs had contacted my agent but he hadn’t told me anything.

“He didn’t want rumours to go to my head. When Leicester came forward, he couldn’t keep it to himself. I was still a bit surprised that a club wanted to give me a contract. I remember telling my mum it was probably fake. Leicester offered me an exceptional chance to give my life another trajectory”. 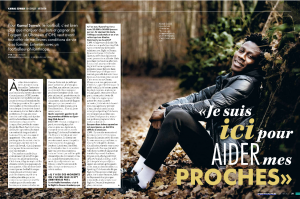 Bringing his family with him from Zongo, the midfielder hasn’t forgotten his roots, wanting to ‘show people he’s the son of his parents and can be a good ambassador for Ghana’.

That would include playing for the national team, which he came extremely close to doing back in September, only to be dropped at the last minute.

As for his career plan, does it include Leicester and representing his country? “Yeah, but the national team can knock on my door tomorrow and I’ll grab my chance. That being said, I don’t want to impose myself on the manager”.