Manchester City’s João Cancelo and Bernardo Silva ‘would welcome changing’ the Premier League winners for Barcelona, according to Mundo Deporitvo.

Over the weekend, The Sunday Times reported the two clubs are in favour of carrying out an exchange operation, and further added the Citizens could offer the Portuguese duo to the Catalan club.

Claims made by The Sunday Times are backed up by Mundo, and they add Ronaldo Koeman’s side like the two City players. The Catalan club are working on a swap deal that ‘has a certain complexity’.

Both Cancelo and his compatriot have contracts until 2025, but they are open to the idea of moving to the Camp Nou.

There’s a ‘good harmony’ between Txiki Begiristain, the City director of football, and Laporta.

The Barca chief also has a good relationship with Jorge Mendes, who manages the two players, and this could favour the Spanish side to sign the right-back and the midfielder. 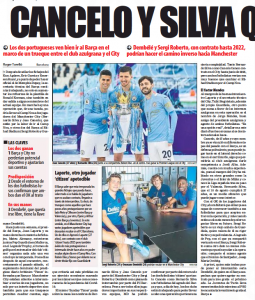 According to Mundo, those close to Cancelo and Silva have informed them that joining Barcelona is a ‘real option’ this summer.

With the ‘OK’ of the duo, it’s now down to Barcelona to convince their own players to move to Manchester.

Sergi Roberto and Ousmane Dembélé are the two names discussed, and it’ll be interesting to see how things develop on a potential exchange deal.