Sporting are hoping to get as much as €25m for Matheus Nunes as Everton push to secure his signature.

That’s according to A Bola, who provide the latest on the Blues move for the Portuguese midfielder today.

The newspaper explains that like every Portuguese side, Sporting need to sell before they can buy this summer, and in that regard, Nunes is ‘the most pressing’.

There have been ‘consistent approaches’ from Everton and Newcastle for his signature, while there are other clubs following him also.

That makes him the ‘strongest candidate’ to leave the club, and while there are no ‘concrete proposals’ as yet, a move is a strong possibility. 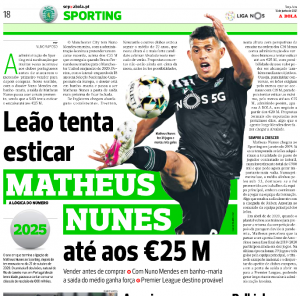 Sporting will take a deal worth €20m but are hoping to stretch it to €25m if they can, believing that price can be met via bonuses.

They will start negotiations at €18m and then try to stretch that to the maximum of €25m but have admitted to A Bola they will take €20m and walk away happy.

Everton are yet to make a firm bid, although ‘formal negotiations’ are expected in the coming days, with Jorge Mendes unsurprisingly leading the process.