Spending lavishly after their return to the Premier League, Aston Villa impressed on the transfer market with some of their deals, especially when it came to their defence.

Dean Smith prioritised the bolstering of his backline, while also adding some talent in midfield and up front with the likes of Marvelous Nakamba and Wesley Moraes.

A trend that was quite interesting in all this was where some of these players were playing, or had played in their past: Belgium.

Both Nakamba and Wesley were signed from Club Brugge, while Björn Engels and Trezeguet had past through the Jupiler Pro League recently (Brugge (again) and Anderlecht respectively).

Before that, there was also Lovre Kalinić, who was signed from Gent, and Aston Villa have one man to thank in particular for all these transfers: Evert Maeschalck, who works for the SportPlus agency, and oversees the affair of Engels, among others.

Sport/Foot looked at this new Belgian influx in their weekly magazine, and reported that Aston Villa’s technical director, Jesús García Pitarch, first got in touch when he started taking an interest in the Belgian defender before his move to Reims. 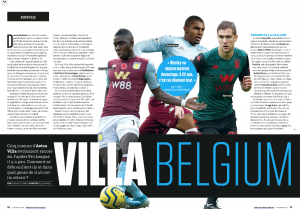 Through that initial contact, Maeschalck helped the Spaniard discover the leagues in Belgium.

He explained: “At the time, many players at Aston Villa were nearing the end of their contract. The club were looking for replacements. We then explored the Belgian market”.

As well as eventually bringing Engels to Villa Park, Sport/Foot reveal Maeschalck also helped Aston Villa in their efforts to sign both Wesley and Nakamba.

He remains modest, however: “I just helped with the exchange of information and allowed the two clubs to get in touch”.

A useful contact to have for Villa, and if they do stay up in the Premier League, perhaps they’ll need his services again, as we all know the Belgian league is one full of young talents, where English and other European sides have dipped their toes in in the past.