In March, we relayed news from Spain that Barcelona were waiting to see if Manchester City will make an offer for Matthijs de Ligt.

Ever since the La Liga winners agreed a deal with Ajax for Frenkie de Jong, the Blaugrana mainly, but also and Pep Guardiola’s side, have been linked with a move for the Netherlands international.

A ‘Top Secret’ report from today’s edition of Mundo Deportivo now claims the 19-year-old will sit down with his agent and evaluate all the options he has on the table after Ajax’s final game of the season against De Graafschap.

In the list of the possible destinations, the Catalan newspaper mentions Bayern Munich, Juventus, Paris Saint-Germain and ‘perhaps Manchester City’.

It makes sense for City to sign De Ligt in the summer as they need to bring in a long-term replacement for Vincent Kompany, and Nicolás Otamendi could be allowed to leave the Etihad after the FA Cup final. 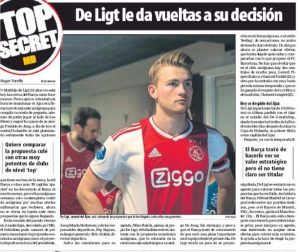 For De Ligt, the Premier League winners still remain one of the options.

Arguably the most wanted player on the market right now, there’s been confidence in Barcelona around De Ligt, but if they’re signing Antoine Griezmann, as well as having agreed the De Jong deal, then they need to raise serious funds.