Martin Braithwaite has a contract with Middlesbrough until June 2021 but has made it very clear he’s not so keen on returning to fulfil that, enjoying his time in Spain.

The 27 year old moved to Leganes on loan in the January transfer window and scored three goals in his first seven La Liga appearances. He also scored against Real Madrid in January, in the Copa del Rey, and things were looking good.

A few days after that match, he hinted he’d like a longer stay in Spain, and then in March he went further.

“The project I was presented with in Middlesbrough changed completely when Pulis arrived. He has a strange way to play football. The team plays defensively with long balls. It’s really kick and rush. It doesn’t look so good to me.

“It’s also the reason I didn’t play that much in Middlesbrough, but I never complained. I worked hard and tried to maintain the good mood every day in training.”

Whilst Braithwaite suggested he didn’t think Leganes could afford a permanent transfer in the summer, the plan was clearly to impress enough to attract others.

Since those first seven La Liga matches, the 27 year old has scored once in the following eleven. 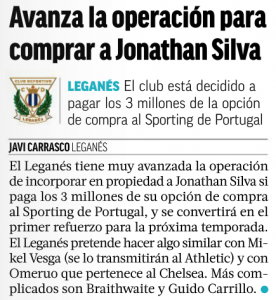 Wednesday’s edition of Marca says signing Braithwaite is ‘more complicated’ for Leganes than other options, leaving both player and Middlesbrough with the problem of what to do next.

Right now, there’s not really a queue of other Spanish clubs waiting to sign him.