Liverpool are keen on Porto youngster Vitinha this summer, with Jurgen Klopp’s assistant Pepijn Lijnders ‘keeping a close eye’ on the player.

That’s according to O Jogo, who say that the ‘siege begins to tighten’ on the midfielder after his performances this season.

Vitinha returned to Porto last summer after a loan spell with Wolves last season and has gone on to establish himself as a key player under Sergio Conceicao.

The big European clubs have started to ‘position themselves’ for a transfer, having been impressed by his performances this season.

Liverpool are one of them, with it explained that they have been ‘keeping a close eye’ on the player’s progress via Ljinders.

They are not the only major player on the market as Bayern were brought into it this week, too, while Lazio are also reportedly keen. 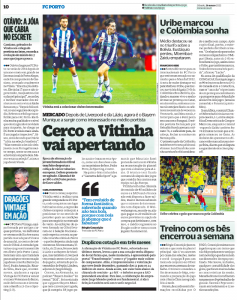 The midfielder has a €40m release clause in his contract, and Porto are ‘not willing to make sales’, even less so knowing that the number of suitors has ‘skyrocketed’ over the course of this season.

That suggests Liverpool will have to match that clause if they want to their interest into something more concrete in the near future.

There’s no indication of that happening at this moment in time, but they are certainly keen, so much so that Klopp has sent his right-hand man to watch over the player.